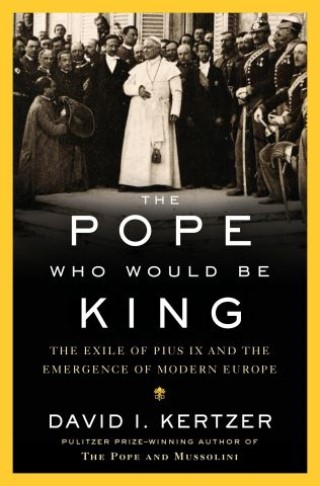 The Pope Who Would Be King

The Exile of Pius IX and the Emergence of Modern Europe

The Pulitzer Prize–winning author of The Pope and Mussolini tells the story of the bloody revolution that stripped the pope of political power and signaled the birth of modern Europe.

“[David I.] Kertzer’s brilliant treatment of the crisis in the papacy between 1846 and 1850 reads like a thriller. All the characters, from the poor of Rome to the king of Naples, stand out with a vividness that testifies to his mastery of prose.”—Jonathan Steinberg, The New York Review of Books

Only two years after Pope Pius IX’s election in 1846 had triggered great popular enthusiasm across Italy, the pope found himself a virtual prisoner in his own palace. The revolutions that swept through Europe and shook Rome threatened to end the popes’ thousand-year reign over the Papal States, if not the papacy itself. The resulting drama—with a colorful cast of characters, from Louis Napoleon and his rabble-rousing cousin Charles Bonaparte to Garibaldi, Tocqueville, and Metternich—was rife with treachery, tragedy, and international power politics. David Kertzer, one of the world’s foremost experts on the history of Italy and the Vatican, brings this pivotal moment vividly to life.

Praise for The Pope Who Would Be King

“Engaging, intelligent, and revealing . . . essential reading for those seeking to understand the perennial human forces that shape both power and faith.” —Jon Meacham, Pulitzer Prize–winning author of The Soul of America

“Required, and riveting, reading that shares many of the qualities of Kertzer’s Pulitzer Prize-winning masterpiece: an exceptionally deep archival and scholarly foundation, and a rare capacity to tell the story of a critical chapter in European history with novelistic verve.”—Kevin Madigan, author of Medieval Christianity

“A remarkable achievement—both a page-turner and a major contribution to scholarship accomplished with outstanding clarity and economy. Kertzer gives this story a notable degree of freshness, and brings out vividly the determination, passions, blood, and gore of this dramatic moment in European history.”—John Davis, editor, Journal of Modern Italian Studies

David I. Kertzer: David I. Kertzer is the Paul Dupee, Jr. University Professor of Social Science and professor of anthropology and Italian studies at Brown University, where he served as provost from 2006 to 2011. He is the author of twelve books, including The Pope and Mussolini, winner of the 2015 Pulitzer Prize for biography and the American Historical Association Prize for best book on Italian history; The Popes Against the Jews, a finalist for the Mark Lynton History Prize; and The Kidnapping of Edgardo Mortara, a finalist for the National Book Award in 1997. He has twice been awarded the Marraro Prize from the Society for Italian Historical Studies for the best book on Italian history and in 2005 was elected to membership in the American Association of Arts and Sciences. He and his wife, Susan, live in Providence, Rhode Island, and Harpswell, Maine.