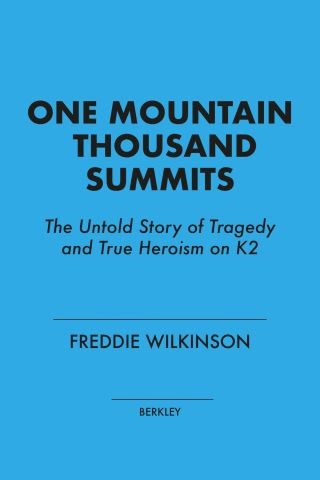 The Untold Story of Tragedy and True Heroism on K2

The account of one of the deadliest and most mysterious tragedies in mountaineering history-the 2008 K2 disaster.

One Mountain Thousand Summits reveals the true story of the K2 tragedy that claimed the lives of eleven men. Based on his numerous trips to Nepal and in-depth interviews he conducted with the survivors, the families of the lost climbers, and the Sherpa guides whose heroic efforts saved the lives of at least four climbers, Freddie Wilkinson's narrative uncovers what actually occurred on the mountain, while delivering a criticism of the mainstream press's incomplete coverage of the event, and an insightful look into the lives of the six Sherpas who were involved.

Freddie Wilkinson: Freddie Wilkinson is a professional alpine climber, mountain guide, and author. He is the recipient of several honors, including the American Alpine Club's Robert Hicks Bates and Lyman Spitzer Awards, the Mugs Stump Award, the McNeill-Nott Award, the prestigious Piolet d'Or, and a grant from the National Geographic Expeditions Council. In addition to having his writing published nationwide in the New York Times, the Huffington Post, National Geographic, Men's Journal, and more, Wilkinson is the author of One Mountain Thousand Summits and the writer and codirector of the documentaries The Old Breed and The Sanctity of Space.