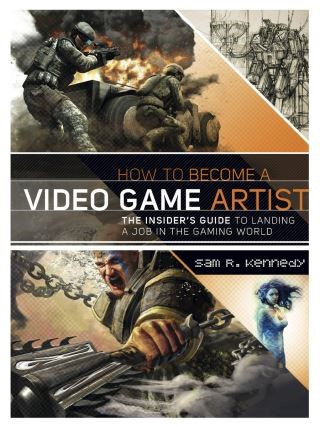 How to Become a Video Game Artist

The Insider's Guide to Landing a Job in the Gaming World

Become a Player in the Business of Video Game Art
Every year video games generate billions of dollars and some of the most dynamic and engaging artwork today. It’s an ever-growing field that holds great professional opportunity, but you need the right skills and savvy if you want to stake your claim. In How to Become a Video Game Artist, veteran video game designer Sam R. Kennedy provides the inside track on everything you need to forge a career in the world of video game art. Starting with the basics of game creation and a look at the artistic skills necessary to get started, Kennedy spotlights specific, key roles for creators—from concept artists to character animators to marketing artists and beyond. Each chapter features screenshots from popular video games like Tom Clancy’s Ghost Recon and World of Warcraft; interviews with video game art professionals who’ve worked for top gaming companies like BioWare, Blizzard, and Ubisoft; step-by-step examples of actual game art; and detailed breakdowns of the training and portfolio samples you’ll need to make these jobs your own. For anyone who wants to go from gamer to game designer, this book contains all the secrets you’ll need to rise to the top of one of the most exciting industries of our time.

Sam R. Kennedy: SAM R. KENNEDY is a freelance illustrator, a graphic designer, and an art instructor, who has held positions at almost every level in the video game art world.  A former marketing artist for Ubisoft, Kennedy has worked on a diverse array of games like Tom Clancy’s Ghost Recon, Tom Clancy’s Rainbow Six, Men of Valor, Teenage Mutant Ninja Turtles, and CyberTiger.