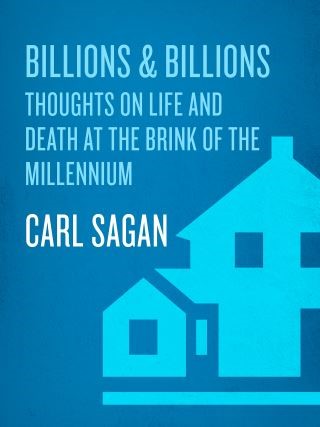 Thoughts on Life and Death at the Brink of the Millennium

NEW YORK TIMES BESTSELLER • In the final book of his astonishing career, Carl Sagan brilliantly examines the burning questions of our lives, our world, and the universe around us.

These luminous, entertaining essays travel both the vastness of the cosmos and the intimacy of the human mind, posing such fascinating questions as how did the universe originate and how will it end, and how can we meld science and compassion to meet the challenges of the coming century? Here, too, is a rare, private glimpse of Sagan’s thoughts about love, death, and God as he struggled with fatal disease.

Ever forward-looking and vibrant with the sparkle of his unquenchable curiosity, Billions & Billions is a testament to one of the great scientific minds of our day.

“Sagan used the spotlight of his fame to illuminate the abyss into which stupidity, greed, and the lust for power may yet dump us. All of those interests and causes are handsomely represented in Billions & Billions.”—The Washington Post Book World

“Astronomer Carl Sagan didn’t live to see the millennium, but he probably has done more than any other popular scientist to prepare us for its arrival.”—Atlanta Journal & Constitution

“Billions & Billions can be interpreted as the Silent Spring for the current generation. . . . Human history includes a number of leaders with great minds who gave us theories about our universe and origins that ran contrary to religious dogma. Galileo determined that the Earth revolved around the Sun, not the other way around. Darwin challenged Creationism with his Evolution of Species. And now, Sagan has given the world its latest challenge: Billions & Billions.”—San Antonio Express-News

“[Sagan’s] inspiration and boundless curiosity live on in the gift of his work.”—Seattle Times & Post-Intelligencer

“Couldn’t stay awake in your high school science classes? This book can help fill in the holes. Acclaimed scientist Carl Sagan combines his logic and knowledge with wit and humor to make a potentially dry subject enjoyable to read.”—The Dallas Morning News

Carl Sagan: Carl Sagan served as the David Duncan Professor of Astronomy and Space Sciences and Director of the Laboratory for Planetary Studies at Cornell University. He played a leading role in the Mariner, Viking, Voyager, and Galileo spacecraft expeditions, for which he received the NASA Medals for Exceptional Scientific Achievement and (twice) for Distinguished Public Service.

His Emmy- and Peabody–winning television series, Cosmos, became the most widely watched series in the history of American public television. The accompanying book, also called Cosmos, is one of the bestselling science books ever published in the English language. Dr. Sagan received the Pulitzer Prize, the Oersted Medal, and many other awards—including twenty honorary degrees from American colleges and universities—for his contributions to science, literature, education, and the preservation of the environment. In their posthumous award to Dr. Sagan of their highest honor, the National Science Foundation declared that his “research transformed planetary science . . . his gifts to mankind were infinite." Dr. Sagan died on December 20, 1996.