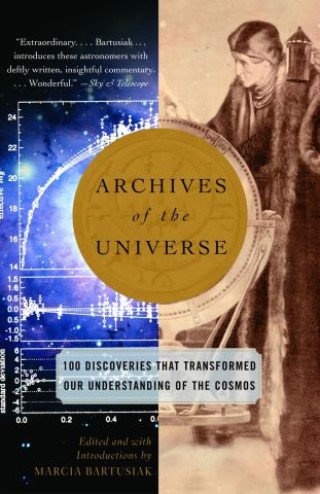 Archives of the Universe

100 Discoveries That Transformed Our Understanding of the Cosmos

An unparalleled history of astronomy presented in the words of the scientists who made the discoveries. Here are the writings of Copernicus, Galileo, Kepler, Newton, Halley, Hubble, and Einstein, as well as that of dozens of others who have significantly contributed to our picture of the universe.

From Aristotle's proof that the Earth is round to the 1998 paper that posited an accelerating universe, this book contains 100 entries spanning the history of astronomy. Award-winning science writer Marcia Bartusiak provides enormously entertaining introductions, putting the material in context and explaining its place in the literature. Archives of the Universe is essential reading for professional astronomers, science history buffs, and backyard stargazers alike.

Marcia Bartusiak: Marcia Bartusiak is the author of Thursday’s Universe, Through a Universe Darkly, and Einstein’s Unfinished Symphony. Her work has appeared in many magazines, including Astronomy, National Geographic, Discover, Science, and Smithsonian. A two-time winner of the American Institute of Physics Science Writing Award, she teaches in the graduate program in science writing at the Massachusetts Institute of Technology and lives in Sudbury, Massachusetts, with her husband.