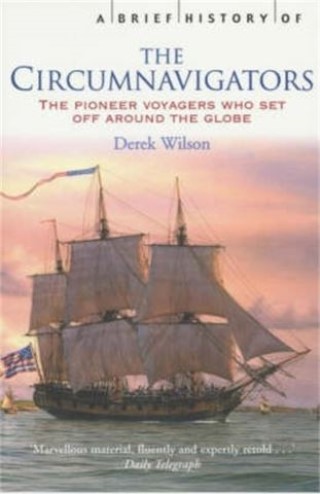 A Brief History of Circumnavigators

"Going round the world" is an idea that has excited people ever since it was realized that the earth was a sphere. The appeal has something to do with encompassing all the known environment and exploring the unknown, not only on the surface of the planet but within the spirit of the explorer. The story of circumnavigation is thus a long saga of human adventure, travel and discovery. Beginning with the fateful day in 1521 when Ferdinand Magellan was speared to death on Mactan and Juan de Elcano took up the challenge of bringing his surviving companions home, the story continues through four centuries crammed with astonishing exploits by men and women of many nations. Some of the names that feature are well-known, others less so.

DEREK WILSON is a renowned Tudor historian. A graduate of Peterhouse, Cambridge, he has written over 50 critically acclaimed books including A Brief History of the Circumnavigators, and The Uncrowned Kings of England, as well as recent biographies of Charlemagne and Holbein.

He is a writer and presenter for radio and television and is also the founder of the Cambridge History festival. He lives in North Devon. Visit his website: www.derekwilson.com