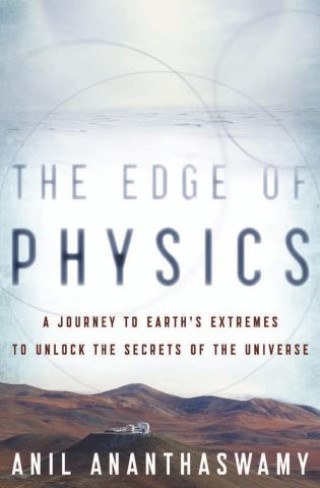 The Edge of Physics

A tour of the exotic and remote outposts where scientists seek answers to the great mysteries: “A thrilling ride around the globe and around the cosmos.” —Sean Carroll, author of From Eternity to Here

In The Edge of Physics, a science writer journeys to the ends of the Earth—visiting remote and sometimes dangerous places—in search of the telescopes and detectors that promise to answer the biggest questions in modern cosmology.

Anil Ananthaswamy treks to the Atacama Desert in the Chilean Andes, one of the coldest, driest places on the planet, where not even a blade of grass can survive, and the spectacularly clear skies and dry atmosphere allow astronomers to gather brilliant images of galaxies billions of light-years away. He takes us inside the European Organisation for Astronomical Research in the Southern Hemisphere’s Very Large Telescope on Mount Paranal, where four massive domes open to the sky each night “like a dragon waking up.”

Ananthaswamy also heads deep inside an abandoned iron mine in Minnesota—where half-mile-thick rock shields physicists as they hunt for elusive dark matter particles. And to the East Antarctic Ice Sheet, where engineers are drilling 1.5 miles into the clearest ice on the planet. They are building the world’s largest neutrino detector, which could finally help reconcile quantum physics with Einstein’s theory of general relativity. The stories of the people who work at these and other research sites make for a compelling new portrait of the universe—and our quest to understand it.

“From the top of Hawaii’s Mauna Kea to Switzerland’s Large Hadron Collider and more, Ananthaswamy paints a vivid picture of scientific investigations in harsh working conditions. . . . Even for readers who don’t know a neutrino from Adam, these interesting tales of human endeavor make The Edge of Physics a trip worth taking.” —Bookpage

“Ananthaswamy journeys to several geographically and scientifically extreme outposts, and returns not only with engaging portraits of the men and women who work there, but also a vibrant glimpse of how cutting-edge research is actually performed. Part history lesson, part travelogue, part adventure story, ‘The Edge of Physics’ is a wonder-steeped page-turner.” —Seed Magazine

“Ananthaswamy displays a writer’s touch for the fascinating detail.” —The Washington Post

Anil Ananthaswamy: Anil Ananthaswamy is a contributor to National Geographic News and a consulting editor for New Scientist in London, where he has also worked as a deputy news editor.