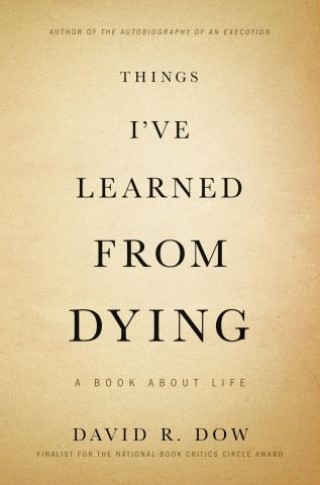 A Book About Life

National Book Critics Circle Award finalist David R. Dow confronts the reality of his work on death row when his father-in-law is diagnosed with lethal melanoma, his beloved Doberman becomes fatally ill, and his young son begins to comprehend the implications of mortality.
"Every life is different, but every death is the same. We live with others. We die alone."

In his riveting, artfully written memoir The Autobiography of an Execution, David Dow enraptured readers with a searing and frank exploration of his work defending inmates on death row. But when Dow's father-in-law receives his own death sentence in the form of terminal cancer, and his gentle dog Winona suffers acute liver failure, the author is forced to reconcile with death in a far more personal way, both as a son and as a father.
Told through the disparate lenses of the legal battles he's spent a career fighting, and the intimate confrontations with death each family faces at home, Things I've Learned From Dyingoffers a poignant and lyrical account of how illness and loss can ravage a family. Full of grace and intelligence, Dow offers readers hope without cliche and reaffirms our basic human needs for acceptance and love by giving voice to the anguish we all face--as parents, as children, as partners, as friends--when our loved ones die tragically, and far too soon.

David R. Dow:
David R. Dow is professor of law at the University of Houston Law Center and an internationally recognized figure in the fight against the death penalty. Nominated for a National Book Critics Circle Award for The Autobiography of an Execution, he is also the founder and director of the Texas Innocence Network and has represented more than one hundred death row inmates in their state and federal appeals. He lives in Houston, Texas.