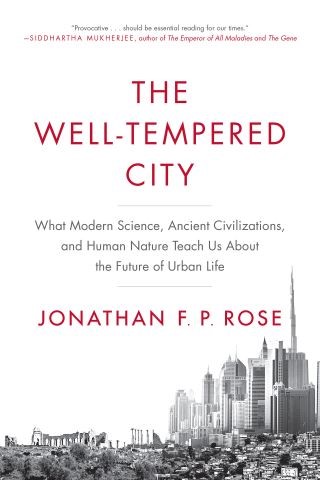 What Modern Science, Ancient Civilizations, and Human Nature Teach Us About the Future of Urban Life

In the vein of Jane Jacobs’s The Death and Life of Great American Cities and Edward Glaeser’s Triumph of the City, Jonathan F. P. Rose—a visionary in urban development and renewal—champions the role of cities in addressing the environmental, economic, and social challenges of the twenty-first century.

Cities are birthplaces of civilization; centers of culture, trade, and progress; cauldrons of opportunity—and the home of eighty percent of the world’s population by 2050. As the 21st century progresses, metropolitan areas will bear the brunt of global megatrends such as climate change, natural resource depletion, population growth, income inequality, mass migrations, education and health disparities, among many others.

In The Well-Tempered City, Jonathan F. P. Rose—the man who “repairs the fabric of cities”—distills a lifetime of interdisciplinary research and firsthand experience into a five-pronged model for how to design and reshape our cities with the goal of equalizing their landscape of opportunity. Drawing from the musical concept of “temperament” as a way to achieve harmony, Rose argues that well-tempered cities can be infused with systems that bend the arc of their development toward equality, resilience, adaptability, well-being, and the ever-unfolding harmony between civilization and nature. These goals may never be fully achieved, but our cities will be richer and happier if we aspire to them, and if we infuse our every plan and constructive step with this intention.

A celebration of the city and an impassioned argument for its role in addressing the important issues in these volatile times, The Well-Tempered City is a reasoned, hopeful blueprint for a thriving metropolis—and the future.

JONATHAN F. P. ROSE works with cities and not-for-profits to plan and build affordable and mixed-income housing and cultural, health, and educational centers. Recognized for creating communities that literally heal both residents and neighborhoods, Rose is one of the nation’s leading thinkers on the integration of environmental, social, and economic solutions to issues facing cities today.

For his work as founder of the investment, development, and urban planning firm Jonathan Rose Companies, he has received awards from the Urban Land Institute, the American Institute of Architects, the American Planning Association, and the National Trust for Historic Preservation, among many others. With Diana Calthorpe Rose, he is cofounder of the Garrison Institute and the creator of its Climate Mind and Behavior program.