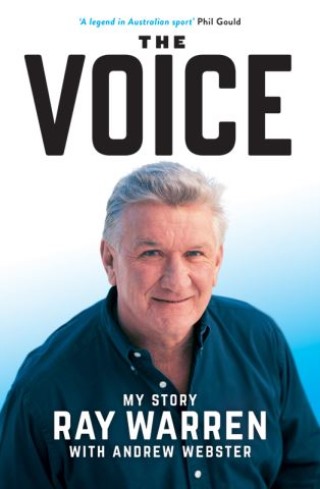 Ray 'Rabbits' Warren is the legendary voice of Australian sports commentary. People tell him he must have drunk a bottle of scotch and smoked a packet of cigarettes every day to have the voice that he has. That's not the case – at least, not anymore . . .

The son of a railway worker, Ray placed his first bet on a horse called Playboy at the age of just six, and won. A lifelong love of the track – and the punt – was born.

Here, for the first time, Ray reveals the man behind the microphone. He speaks of the great highs and devastating lows of his career and life in the same way he calls every sporting event: with great passion, colour and candour.

‘When it comes to rugby league commentary, there is little dispute that Ray Warren is the best in the business … I know you’ll enjoy his story.’ —Alan Jones AO

‘It’s not the vision that sells this game. It’s not just the amazing feats of these mighty players. It’s the way Ray Warren calls the action. The sense of theatre he brings to the call. Ray makes the game better. He brings it to life in lounge rooms all over the country. Ray Warren is the voice of rugby league.’ —Phil Gould

‘I loved rugby league growing up in Sydney ... and you can’t talk rugby league without talking Ray Warren. They are synonymous.’ —Hugh Jackman

‘There are enough well-rehearsed yarns about the footy, boozing, betting, “colourful” identities, misadventures and bending rules in the workplace to keep a reader turning pages.’ —Weekend Australian

Ray ‘Rabbits’ Warren is one of the most experienced sports broadcasters in Australia.

Andrew Webster is the Chief Sports Writer for the Sydney Morning Herald.

Ray Warren: Ray ‘Rabbits’ Warren is one of the most experienced sports broadcasters in Australia.Andrew Webster is the Chief Sports Writer for the Sydney Morning Herald.