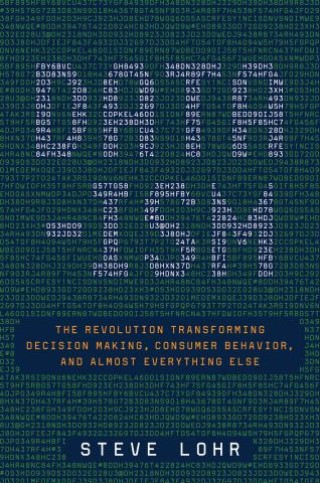 The Revolution Transforming Decision Making, Consumer Behavior, and Almost Everything Else

By one estimate, 90 percent of all of the data in history was created in the last two years. In 2014, International Data Corporation calculated the data universe at 4.4 zettabytes, or 4.4 trillion gigabytes. That much information, in volume, could fill enough slender iPad Air tablets to create a stack two-thirds of the way to the moon. Now, that's Big Data.

Coal, iron ore, and oil were the key productive assets that fueled the Industrial Revolution. The vital raw material of today's information economy is data.

In Data-ism, New York Times reporter Steve Lohr explains how big-data technology is ushering in a revolution in proportions that promise to be the basis of the next wave of efficiency and innovation across the economy. But more is at work here than technology. Big data is also the vehicle for a point of view, or philosophy, about how decisions will be—and perhaps should be—made in the future. Lohr investigates the benefits of data while also examining its dark side.

Data-ism is about this next phase, in which vast Internet-scale data sets are used for discovery and prediction in virtually every field. It shows how this new revolution will change decision making—by relying more on data and analysis, and less on intuition and experience—and transform the nature of leadership and management. Focusing on young entrepreneurs at the forefront of data science as well as on giant companies such as IBM that are making big bets on data science for the future of their businesses, Data-ism is a field guide to what is ahead, explaining how individuals and institutions will need to exploit, protect, and manage data to stay competitive in the coming years. With rich examples of how the rise of big data is affecting everyday life, Data-ism also raises provocative questions about policy and practice that have wide implications for everyone.

The age of data-ism is here. But are we ready to handle its consequences, good and bad?

Steve Lohr has covered technology, business, and economics for the New York Times for more than twenty years and writes for the Times' Bits blog. In 2013 he was part of the team awarded the Pulitzer Prize for Explanatory Reporting. He was a foreign correspondent for a decade and served as an editor, and has written for national publications such as the New York Times Magazine, the Atlantic, and the Washington Monthly. He is the author of Go To: The Story of the Math Majors, Bridge Players, Engineers, Chess Wizards, Maverick Scientists, and Iconoclasts—the Programmers Who Created the Software Revolution. He lives in New York City.