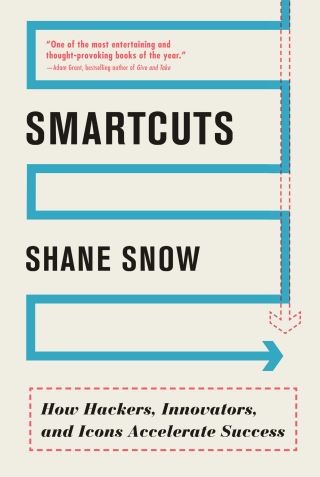 The Breakthrough Power of Lateral Thinking

Entrepreneur and journalist Shane Snow (Wired, Fast Company, The New Yorker, and cofounder of Contently) analyzes the lives of people and companies that do incredible things in implausibly short time.

How do some startups go from zero to billions in mere months? How did Alexander the Great, YouTube tycoon Michelle Phan, and Tonight Show host Jimmy Fallon climb to the top in less time than it takes most of us to get a promotion? What do high-growth businesses, world-class heart surgeons, and underdog marketers do in common to beat the norm?

One way or another, they do it like computer hackers. They employ what psychologists call "lateral thinking: to rethink convention and break "rules" that aren't rules.

These are not shortcuts, which produce often dubious short-term gains, but ethical "smartcuts" that eliminate unnecessary effort and yield sustainable momentum. In Smartcuts, Snow shatters common wisdom about success, revealing how conventions like "paying dues" prevent progress, why kids shouldn't learn times tables, and how, paradoxically, it's easier to build a huge business than a small one.

From SpaceX to The Cuban Revolution, from Ferrari to Skrillex, Smartcuts is a narrative adventure that busts old myths about success and shows how innovators and icons do the incredible by working smarter—and how perhaps the rest of us can, too.

Shane Snow is a New York City–based journalist and Web entrepreneur, and the cofounder and chief creative officer of the media technology company Contently. He holds a master's degree in journalism from Columbia University and is a fellow of the Royal Society of the Arts. Snow contributes regularly to Wired magazine and Fast Company, and has written about innovation for numerous publications, including the New Yorker, the Washington Post, and Advertising Age. Snow is a sought-after speaker at technology and advertising summits, and writes for LinkedIn's Influencer program. His work in technology entrepreneurship has been recognized by the United Nations, the New York Times, Inc., Forbes, Details, and New York City's Economic Development Council.