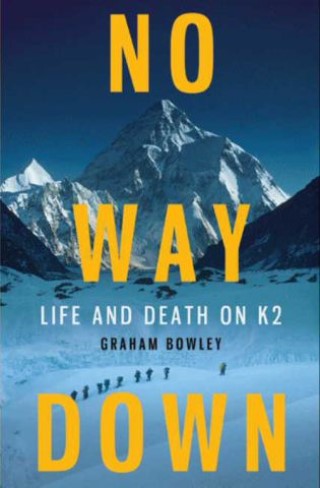 Life and Death on K2

“No Way Down is both a gripping read and a clear-eyed investigation of the hubris, politics, and bad luck that brought on one of the worst disasters in modern mountaineering history.” — Michael Kodas, author of High Crimes: The Fate of Everest in an Age of Greed

“Graham Bowley’s No Way Down does a great job of putting you on the mountain. It is a refreshingly unadorned account of the true brutality of climbing K2, where heroes emerge and egos are stripped down, and the only thing achieving immortality is the cold ruthless mountain.” — Norman Ollestad, author of Crazy for the Storm

In the tradition of Into Thin Air and Touching the Void, No Way Down by New York Times reporter Graham Bowley is the harrowing account of the worst mountain climbing disaster on K2, second to Everest in height... but second to no peak in terms of danger. From tragic deaths to unbelievable stories of heroism and survival, No Way Down is an amazing feat of storytelling and adventure writing, and, in the words of explorer and author Sir Ranulph Fiennes, “the closest you can come to being on the summit of K2 on that fateful day.”

Graham Bowley is a reporter for the New York Times. He grew up in England and lives in New York with his wife and three children.