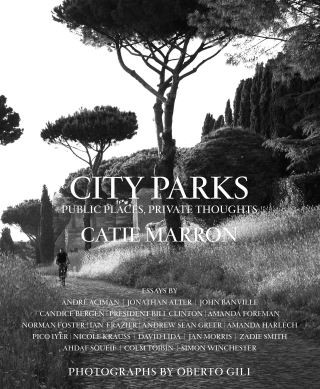 Andrew Sean Greer eloquently paints a portrait of first love in the Presidio; André Aciman muses on time’s fleeting nature and the changing face of New York viewed from the High Line; Pico Iyer explores hidden places and privacy in Kyoto; Jonathan Alter takes readers from the 1968 race riots to Obama’s 2008 victory speech in Chicago’s Grant Park; Simon Winchester invites us along on his adventures in the Maidan; and Bill Clinton writes of his affection for Dumbarton Oaks.

Oberto Gili’s color and black-and-white photographs unify the writers’ unique and personal voices. Taken around the world over the course of a year, in every season, his pictures capture the inherent mood of each place. Fusing images and text, City Parks is an extraordinary and unique project: through personal reflection and intimate detail it taps into collective memory and our sense of time’s passage.

Catie Marron is the creator and editor of two anthologies published by HarperCollins which explore the value and significance of urban public spaces: City Squares, Eighteen Writers on the Spirit and Significance of Squares Around the World (2016), and City Parks: Public Places, Private Thoughts (2013). She is currently working on a third book for HarperCollins, which centers on how gardens and the process of their creation enrich lives.

Marron’s career has encompassed investment banking, magazine journalism, public service, and book publishing. She is currently a trustee and Chair Emeritus of The New York Public Library, where she was Chairman of the Board from 2004 to 2011. Marron is also a trustee of Friends of the High Line, where she was also Board Chair, and a trustee of The Metropolitan Museum of Art and the Doris Duke Charitable Foundation.

Marron began her first career in investment banking at Morgan Stanley and then at Lehman Brothers. She then became Senior Features Editor at Vogue, where she has been a contributing editor for twenty years. While writing her books, Marron launched Good Companies, a curated, online guide to companies that strive to do good while also making a profit. This venture was shaped in part by the success of Treasure & Bond, a pop-up store that she co-founded with Nordstrom and Anna Wintour in 2011. All of the store’s profits went to charities benefiting NYC children.

Oberto Gili is a photographer who specializes in shooting interiors and fashion. The author of Home Sweet Home: Sumptuous And Bohemian Interiors And Luxury Of Space, he works for such publications as the Wall Street Journal, Architectural Digest, Travel & Leisure, and British, Spanish, and American Vogue.