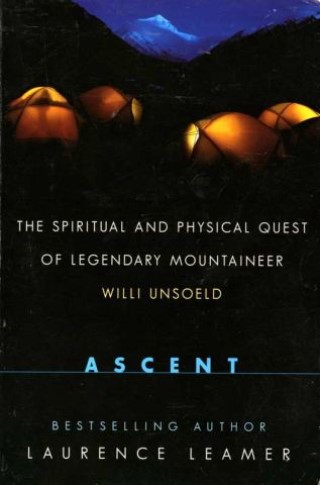 The Spiritual And Physical Quest Of Lege

Willi Unsoeld, a legend among mountaineers--a man whom Bill Moyers calls one of the few giants he has ever met--fearlessly challenged the world's highest peaks and inspired a generation of climbers with his legacy.

Ascent is the story of his life--a thrilling tale of physical and spiritual adventure that captures the hypnotic force behind this extraordinary personality. From his triumphant conquest of Everest's forbidding West Ridge to the tragic loss of his daughter on the treacherous slopes of Nanda Devi to his final, fatal attempt at Mount Rainier, we see Willi as guru and guide, lover of danger and philosopher of risk--a man whose indomitable spirit triggered such devotion that people followed him fearlessly to extraordinary heights and, sometimes, even to their deaths. A dramatic saga of bravery, daring, and the search for spiritual truth, Ascent brilliantly captures the mythic figure of Willi Unsoeld.

Laurence Leamer is the New York Times bestselling author of more than a dozen books, including The Kennedy Women and The Price of Justice. He has worked in a French factory and a West Virginia coal mine, and was a Peace Corps volunteer in Nepal. His play, Rose, was produced off Broadway last year. He lives in Palm Beach, Florida, and Washington, D.C., with his wife, Vesna Obradovic Leamer.