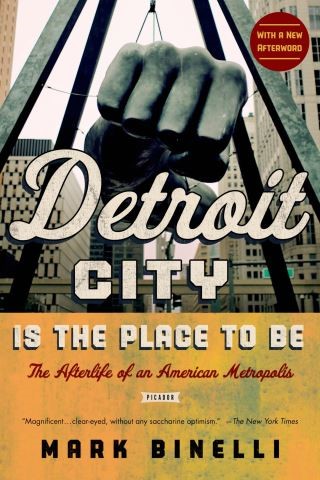 Detroit City Is the Place to Be

The Afterlife of an American Metropolis

Once America's capitalist dream town, Detroit is our country's greatest urban failure, having fallen the longest and the farthest. But the city's worst crisis yet (and that's saying something) has managed to do the unthinkable: turn the end of days into a laboratory for the future. Urban planners, land speculators, neopastoral agriculturalists, and utopian environmentalists—all have been drawn to Detroit's baroquely decaying, nothing-left-to-lose frontier.
With an eye for both the darkly absurd and the radically new, Detroit-area native Mark Binelli has chronicled this convergence. Throughout the city's "museum of neglect"—its swaths of abandoned buildings, its miles of urban prairie—he tracks both the blight and the signs of its repurposing, from the school for pregnant teenagers to a beleaguered UAW local; from metal scrappers and gun-toting vigilantes to artists reclaiming abandoned auto factories; from the organic farming on empty lots to GM's risky wager on the Volt electric car; from firefighters forced by budget cuts to sleep in tents to the mayor's realignment plan (the most ambitious on record) to move residents of half-empty neighborhoods into a viable, new urban center.
Sharp and impassioned, Detroit City Is the Place to Be is alive with the sense of possibility that comes when a city hits rock bottom. Beyond the usual portrait of crime, poverty, and ruin, we glimpse a longshot future Detroit that is smaller, less segregated, greener, economically diverse, and better functioning—what could be the boldest reimagining of a post-industrial city in our new century.
Detroit City Is the Place to Be is one of Publishers Weekly's Top 10 Best Books of 2012

Mark Binelli: Mark Binelli is the author of Detroit City Is the Place to Be and the novel Sacco and Vanzetti Must Die! as well as a contributing editor at Rolling Stone and Men's Journal. Born and raised in the Detroit area, he lives in New York City.