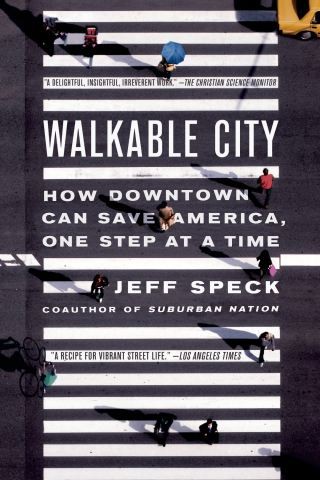 How Downtown Can Save America, One Step at a Time

Jeff Speck has dedicated his career to determining what makes cities thrive. And he has boiled it down to one key factor: walkability.
The very idea of a modern metropolis evokes visions of bustling sidewalks, vital mass transit, and a vibrant, pedestrian-friendly urban core. But in the typical American city, the car is still king, and downtown is a place that's easy to drive to but often not worth arriving at.
Making walkability happen is relatively easy and cheap; seeing exactly what needs to be done is the trick. In this essential new book, Speck reveals the invisible workings of the city, how simple decisions have cascading effects, and how we can all make the right choices for our communities.
Bursting with sharp observations and real-world examples, giving key insight into what urban planners actually do and how places can and do change, Walkable City lays out a practical, necessary, and eminently achievable vision of how to make our normal American cities great again.

Jeff Speck: Jeff Speck, coauthor of the landmark bestseller Suburban Nation, is a city planner who advocates for smart growth and sustainable design. As the former director of design at the National Endowment for the Arts, he oversaw the Mayors’ Institute on City Design, where he worked with dozens of American mayors on their most pressing city planning challenges. He leads a design practice based in Washington, D.C.